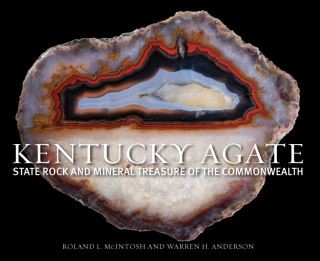 State Rock and Mineral Treasure of the Commonwealth

Among the rarest and most prized minerals, agate is one of the most exquisite examples of nature's artwork. A striking rock that occurs in various shapes and sizes, with a vivid assortment of colors, agates are coveted by collectors and becoming rarer across the globe. Although the Bluegrass State is usually overlooked in the international study of agate, some of the most beautiful and colorful specimens in the world are hidden away in the rugged terrain of eastern Kentucky's scenic Knobs Region.

Kentucky Agate is the first book to showcase the unique mineral, treasured for its fine grain and vibrant banks of deep, varied colors. Authors Roland L. McIntosh and Warren H. Anderson have collected hundreds of professional color photographs, revealing the beauty and diversity of this sought-after stone. With detailed maps of the region surrounding the city of Irvine, Kentucky, including parts of Estill, Powell, Jackson, Menifee, Madison, and Lee counties, Kentucky Agate reveals locations where agate may be found. Featuring full-color photographs showing aspects of the rock not visible to the naked eye, this book also provides detailed information on the history, geology, chemistry, and formation of the mineral, giving collectors and Kentucky nature enthusiasts a stunning look into the world of agate collection and the hidden story of the breathtaking formation of the official state rock.