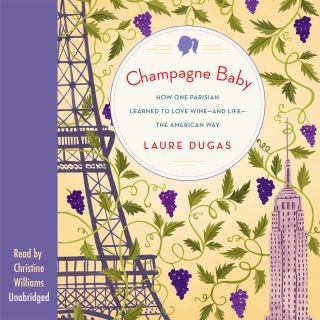 Fresh, charming, and wholly irresistible, Champagne Baby turns a familiar tale on its head: instead of yet another American seeking the French secret to good living, a Frenchwoman finds her purpose-much to her surprise-in America. Laure Dugas is a champagne baby, born into a family of winemakers from two storied regions of France: Champagne and the Rhone Valley. When Laure was an infant, her mother would dip a finger in wine and dab it on Laure's lips to acclimate her to the taste and aroma. But Laure wants little to do with the family business. It is only at age twenty-three, when her uncle offers to send her to New York City to learn English and represent his wines to the American market, that Laure bids adieu to her boyfriend and begins her journey of discovery. The job, it turns out, is both harder and easier than expected. Laure must speak in a new language about a subject in which she has no expertise. But an experienced wine saleswoman shares the secret for faking it: "Always. Be. French." After all, who could claim to know more about wine than a Frenchwoman? With the pedigree of an expert, even as she feels like a fraud, Laure dives into an industry still dominated by men, winning over restaurateurs and sommeliers, diligently developing her palate, and traveling across the vast country that is her new home. For the first time, Laure is able to distinguish among the famous wines of her native land. She learns to greet a wine by the nose and judge a bottle not by its industry rating but by the balance of its flavors. Overcoming homesickness, culture shock, and the trials of a long-distance relationship, Laure manages to settle into her new milieu, her wine-glass-half-full attitude turning an eight-month stint into a three-year adventure. Part coming-of-age memoir, part travelogue, sprinkled throughout with regional maps and wine recommendations, Champagne Baby imparts the critical lessons that pair with both wine and life: "you're better than the cheapest bottle," "there's always occasion for champagne," and "trust your palate." It encourages listeners to view themselves and their surroundings with newfound appreciation, and to raise their glasses with open-mindedness and joy.

Laure Dugas was born in Paris to a family of winemakers and has worked for some of the biggest names in champagne. After three years in New York City, she moved back across the Atlantic to open a wine store in the Batignolles neighborhood of Paris. L'Ebeniste du Vin has done so well that she has since opened a wine and oyster bar next door with her husband, and in 2016 they will open a new restaurant called La Table de l'Ebeniste. She lives with her husband and daughter in Paris.

Christine Williams is a singer and actor based in Ashland, Oregon. Her performance credits include productions at regional theaters and on concert stages across the country and around the world, from the Oregon Shakespeare Festival and the Barbican Centre in London to the Aspen Music Festival and the Grotowski Institute in Poland.