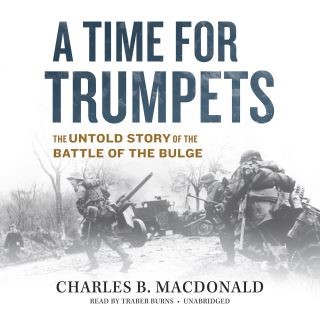 A Time for Trumpets

The Untold Story of the Battle of the Bulge

On December 16, 1944, the vanguard of three German armies, totaling half a million men, attacked US forces in the Ardennes region of Belgium and Luxembourg, achieving what had been considered impossible-total surprise. In the most abysmal failure of battlefield intelligence in the history of the US Army, 600,000 American soldiers found themselves facing Hitler's last desperate effort of the war.The brutal confrontation that ensued became known as the Battle of the Bulge, the greatest battle ever fought by the US Army-a triumph of American ingenuity and dedication over an egregious failure in strategic intelligence. A Time for Trumpets is the definitive account of this dramatic victory, told by one of America's most respected military historians, who was also an eyewitness: MacDonald commanded a rifle company in the Battle of the Bulge. His account of this unique battle is exhaustively researched, honestly recounted, and movingly authentic in its depiction of hand-to-hand combat.Mingling firsthand experience with the insights of a distinguished historian, MacDonald places this profound human drama unforgettably on the landscape of history.

Charles B. MacDonald (1922-1990) served in four European campaigns and received the Purple Heart and the Silver Star. After the war, he wrote Company Commander, regarded as a World War II classic. He served as deputy chief historian for the United States Army, writing several of the Army's official histories of World War II.

Traber Burns worked for thirty-five years in regional theater, including the New York, Oregon, and Alabama Shakespeare festivals. He also spent five years in Los Angeles appearing in many television productions and commercials, including Lost, Close to Home, Without a Trace, Boston Legal, Grey’s Anatomy, Cold Case, Gilmore Girls, and others.