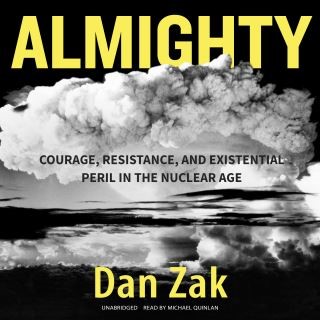 Courage, Resistance, and Existential Peril in the Nuclear Age

A riveting, chilling tale of how a group of ragtag activists infiltrated one of the most secure nuclear weapons sites in the United States, told alongside a broader history of America's nuclear stewardshipOn Saturday, July 28, 2012, an eighty-two-year-old Catholic nun, a Vietnam veteran, and a house painter infiltrated the Oak Ridge, Tennessee, nuclear complex in the dead of night, smearing the walls with human blood and spray-painting quotes from the Bible. Then they waited to be arrested. What was a simple plan-one far more successful than even its perpetrators expected-spawned a complex discussion. How did three unarmed civilians manage to penetrate one of the most heavily guarded locations in the world, nicknamed the "Fort Knox of Uranium"? Why does the United States continue to possess more nuclear weaponry than is needed to destroy global civilization many times over? And what does this mean for the day-to-day safety of Americans?In Almighty, Washington Post writer Dan Zak begins with the present-day axis of a seventy-year-old story, exploring how events of the twentieth century led to one of the most successful and high-profile demonstrations of anti-nuclear activism.

Dan Zak is a feature writer and general assignment reporter based in the Style section of the Washington Post. He has reported from a bathroom at the Vanity Fair Oscar party, a Hurricane Hunter over the Gulf of Mexico, an MRAP in Iraq's Anbar province, the East Room of the White House, and the gymnasium of the Alexandria jail. He joined the Post in 2005, after stints as an editorial assistant at Entertainment Weekly and as a city-desk reporter and obituary writer at the Buffalo News. He was born and raised in Buffalo, New York.