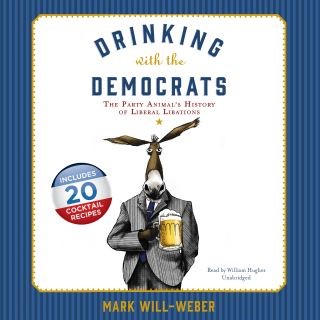 Drinking with the Democrats

This new gift edition spin-off of Mint Juleps with Teddy Roosevelt looks at the favorite beers, liquors, and cocktail recipes of Democratic presidents and their first ladies.This election year, celebrate the Democratic Party by drinking like a Democrat! Organized by president, this fun audiobook is full of cocktail recipes, bar tips, and hysterical drinking anecdotes from all Democratic White House administrations. Which Southern man drank Snakebites? How did Jackie O. like her daiquiris? Drinking with the Democrats is the bar guide with a twist that all political buffs will enjoy.

Mark Will-Weber, a seasoned journalist and magazine editor, is the author of multiple books and numerous articles, such as his noted historical feature on the Battle of Antietam. He is the great-grandson of the Civil War general J. K. Robison, who led the Sixteenth Pennsylvania Cavalry during the end-game campaign leading up to Lee's surrender at Appomattox; and the grandson of Colonel Charles Isiah Faddis, who served in three wars-the Mexican Expedition, World War I, and World War II-was awarded two Purple Hearts and a Bronze Star, and served as a United States congressman from 1933 to 1942.

William Hughes is an AudioFile Earphones Award-winning narrator. A professor of political science at Southern Oregon University in Ashland, Oregon, he received his doctorate in American politics from the University of California at Davis. He has done voice-over work for radio and film and is also an accomplished jazz guitarist.