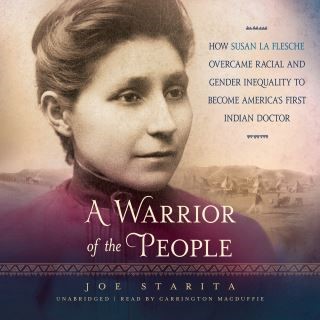 A Warrior of the People

On March 14, 1889, Susan La Flesche received her medical degree-becoming the first Native American doctor in US history. She earned her degree thirty-one years before women could vote and thirty-five years before Indians could become citizens in their own country.

By age twenty-six, this fragile but indomitable Indian woman became the doctor to her tribe. Overnight, she acquired 1,244 patients scattered across 1,350 square miles of rolling countryside with few roads. Her patients often were desperately poor and desperately sick with tuberculosis, small pox, measles, and influenza, with their families scattered miles apart, and whose last hope was a young woman who spoke their language and knew their customs.

This is the story of an Indian woman who effectively became the chief of an entrenched patriarchal tribe, the story of a woman who crashed through thick walls of ethnic, racial, and gender prejudice and then spent the rest of her life using a unique bicultural identity to improve the lot of her people-physically, emotionally, politically, and spiritually.

A Warrior of the People is the moving biography of Susan La Flesche's inspirational life, the subject of the PBS documentary Medicine Woman, and it will finally shine a light on her numerous accomplishments.

Joe Starita is the author of several books, including I Am a Man: Chief Standing Bear's Journey for Justice and The Dull Knifes of Pine Ridge, which was nominated for the Pultizer Prize and won the MPIBA Award. He was the New York bureau chief for Knight-Ridder newspapers and a veteran investigative reporter for the Miami Herald. His stories won more than two dozen awards, one of which was a Pulitzer Prize finalist for local reporting. He has held an endowed chair at the University of Nebraska's College of Journalism and Mass Communications.

Carrington MacDuffie is a voice actor and recording artist who has narrated over two hundred audiobooks, received numerous AudioFile Earphones Awards, and has been a frequent finalist for the Audie Award, including for her original audiobook, Many Things Invisible. Alongside her narration work, she has released a new album of original songs, Only an Angel.