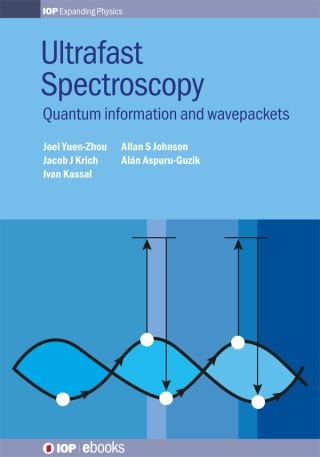 The applications of nonlinear ultrafast spectroscopy are numerous and widespread, and it is an indispensable technique in modern research. Unfortunately, it is also a topic that can be daunting to those meeting it for the first time. Making use of many worked examples and accompanied by MATLAB® codes for numerical simulations of spectra, the authors deliver a practical and intuitive approach to the subject. Assuming just an understanding of quantum mechanics and statistical mechanics, the book delivers an introduction to the subject for advanced students and researchers. It will also be useful for practitioners, who are already familiar with the subject, but who want to develop a more conceptual understanding. Once a reader has assimilated the material in this text, they will be fully equipped with the tools to devise well reasoned spectroscopic experiments.

Alán Aspuru-Guzik: Al�n Aspuru-Guzik is a Professor at Harvard University in the Department of Chemistry and Chemical Biology. He received his doctoral degree from the University of California, Berkeley, and was the recipient of the 35 Innovators under 35 by MIT Technology Review for his contributions to the intersection of quantum information and quantum chemistry. In this context, he is interested in how chemical experiments such as ultrafast spectroscopy can be interpreted using ideas from quantum information. More about his work can be found on his home page, http://aspuru.chem.harvard.edu.Joel Yuen-Zhou is currently the Robert J. Silbey Postdoctoral Fellow in the Center of Excitonics at the Massachusetts Institute of Technology. He received a BSc in Chemistry and Mathematics from the same school in 2007 and a PhD in Chemical Physics from Harvard University in 2012. His research interests are broadly located in the realm of quantum dynamics, specializing in nonlinear spectroscopy, quantum information, time-dependent density functional theory, and topological phases of matter.Jacob Krich is an assistant professor in the Department of Physics at the University of Ottawa. He received his BA in Physics from Swarthmore College in Pennsylvania, followed by an MMath from Oxford University, where he was a Rhodes Scholar. He received his PhD in theoretical condensed-matter physics from Harvard University. After receiving his PhD, Jacob was a Ziff Fellow of the Harvard University Center for the Environment and a postdoctoral fellow in the Department of Chemistry and Chemical Biology at Harvard. His research focuses on novel pathways to high efficiency photovoltaics and nonlinear spectroscopies of organic systems.Ivan Kassal is UQ Postdoctoral Research Fellow in the School of Mathematics and Physics at the University of Queensland. He received his BS in chemistry from Stanford University in 2006 and his Ph.D. in chemical physics from Harvard University in 2010. He has published a number of papers on exciton transport in photosynthesis and on the application of quantum computers to problems in chemistry. His homepage is at http://www.ivankassal.com.Allan Johnson is a Marie-Curie Early Stage Researcher and NSERC PGS award holder in the Quantum Optics and Laser Science division at Imperial College London. Previously he obtained his undergraduate in Physics-Mathematics at the University of Ottawa. Previous to that, he was an actor and set designer. His research interests include non-linear and non-perturbative quantum dynamics in the prescence of strong and ultrafast laser fields