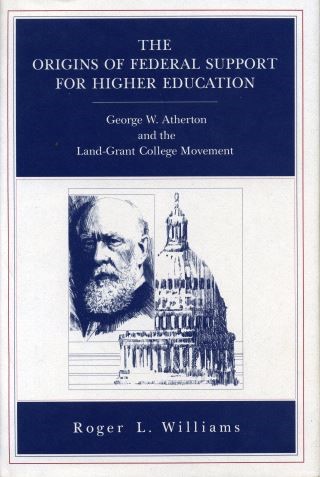 The Origins of Federal Support for Higher Education

The Origins of Federal Support for Higher Education revises the traditional interpretation of the land-grant college movement, whose institutions were brought into being by the 1862 Morrill Act to provide for "the liberal and practical education of the industrial classes." Rather than being the inevitable consequence of the unfolding dynamic of institutional and socioeconomic forces, Williams argues, it was the active intervention and initiative of a handful of educational leaders that secured the colleges' future—above all, the activities of George W. Atherton.

For nearly three decades, Atherton, who was the seventh president of the Pennsylvania State University, worked to secure consistent federal financial support for the colleges, which in their early years received little assistance from the states they were designed to benefit. He also helped to develop the institutions as comprehensive "national" universities grounded in the liberal arts and sciences—a conception that countered the prevailing view of the colleges as mainly agricultural schools.

Atherton became the prime mover in the campaign to enact the 1887 Hatch Act, which encouraged the establishment of agricultural experiment stations at land-grant colleges. The act marked the federal government's first effort to provide continuous funding to research units associated with higher education institutions. At the same times, Atherton played a key role in the formation of the first association of such institutions: The Association of American Agricultural Colleges and Experiment Stations. It was the Association that provided the critical mass needed to lobby Congress successively and to approach the many opportunities and threats the land-grant colleges faced during the 1885–1906 period.

Atherton was also deeply involved in the campaign for the Morrill Act of 1890, which provided long-sought annual appropriations to land-grant colleges for a broad range of academic programs and encouraged steady growth in state support during the 1890s.

Roger Williams traces the motives and tactics behind a series of laws that made the federal government irreversibly committed to funding higher education and scientific research and provides rich new insights into the complexities, polarities, and inherent contradictions of the history of the American land-grant movement.

Roger L. Williams: Roger L. Williams is Assistant Vice President and Executive Director of University Relations at the Pennsylvania State University. This book is a revised version of his dissertation, which won the 1989 Distinguished Dissertation Award of the Association for the Study of Higher Education.