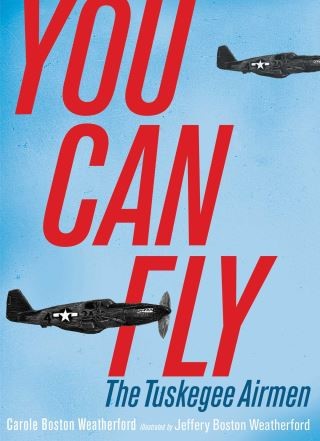 In this “masterful, inspiring evocation of an era” (Kirkus Reviews, starred review), award-winning author Carole Boston Weatherford “wields the power of poetry to tell [the] gripping historical story” (Publishers Weekly, starred review) of the Tuskegee Airmen: pioneering African-American pilots who triumphed in the skies and past the color barrier during World War II.

I WANT YOU! says the poster of Uncle Sam. But if you’re a young black man in 1940, he doesn’t want you in the cockpit of a war plane. Yet you are determined not to let that stop your dream of flying.

So when you hear of a civilian pilot training program at Tuskegee Institute, you leap at the chance. Soon you are learning engineering and mechanics, how to communicate in code, how to read a map. At last the day you’ve longed for is here: you are flying!

From training days in Alabama to combat on the front lines in Europe, this is the story of the Tuskegee Airmen, the groundbreaking African-American pilots of World War II. In vibrant second-person poems, Carole Boston Weatherford teams up for the first time with her son, artist Jeffery Weatherford, in a powerful and inspiring book that allows readers to fly, too.

Carole Boston Weatherford: Carole Boston Weatherford has written many award-winning books for children, including Caldecott Honor winners Freedom in Congo Square; Voice of Freedom: Fannie Lou Hamer, Spirit of the Civil Rights Movement; and Moses: When Harriet Tubman Led Her People to Freedom. Her recent books include By and By, The Roots of Rap, Be a King, How Sweet the Sound, In Your Hands, and The Legendary Miss Lena Horne. Carole lives in North Carolina. Visit her at CBWeatherford.com.Jeffery Boston Weatherford created the scratchboard illustrations for You Can Fly using archival World War II photographs as reference. Jeffery studied art at Winston-Salem State University, where he was a Chancellor’s Scholar, and at Howard University, where he earned a Master of Fine Arts.