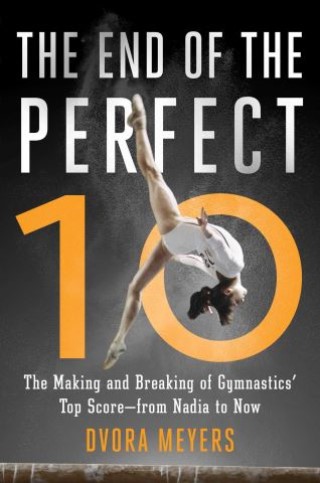 The End of the Perfect 10

A “delightful and insightful” (The Wall Street Journal) account of the controversial world of gymnastics and its scoring system, which has propelled powerful and athletic American gymnasts to the top of the sport.

It was the team finals of women’s gymnastics in the 2012 London Olympics and McKayla Maroney was on top of her game. The sixteen-year-old US gymnast was performing arguably the best vault of all time, launching herself unimaginably high into the air and sticking a flawless landing. But when her score came, many were baffled: 16.233. Three tenths of a point in deductions stood between her and a perfect score. But if that vault wasn’t perfection, what was?

For years, gymnastics was scored on a 10.0 scale. During this era, more than 100 “perfect” scores were awarded in major international competitions. But when the 10.0 scoring system caused major judging controversies at the 2004 Olympics, international elite gymnastics made the switch to the open-ended scoring system it uses today, which values both difficulty and technical execution, making perfect scores a thing of the past—and forever altering the sport in the process.

With insight, flair, and boundless love for the sport, gymnastics insider Dvora Meyers answers questions that fans have been asking since the last perfect score was handed out over twenty years ago. She reveals why successful female gymnasts like 2016 Olympics All Around medalists Simone Biles and Aly Raisman are older and more athletic than they have ever been before, how the United States became the gymnastics powerhouse it is today, and what the future of gymnastics may hold.

Bolstered by dozens of exclusive interviews with professionals representing every aspect of the sport, The End of the Perfect 10 is “the Simone Biles of gymnastics books” (Slate), a captivating look at elite gymnastics’ entry into the uncharted world of imperfection—and how it has created stronger athletes than ever before.

Dvora Meyers: Dvora Meyers is a New York-based writer and journalist. In 2012, she provided all of the Olympic gymnastics coverage for Deadspin and Jezebel, chronicling the results of the competition as well as her own commentary. Her work on the sport has also appeared in ESPN, Slate, VICE, and The Atlantic. Her other non-gymnastics related writing has been published in The New York Times, Elle, Tablet, New York magazine, and several other publications.