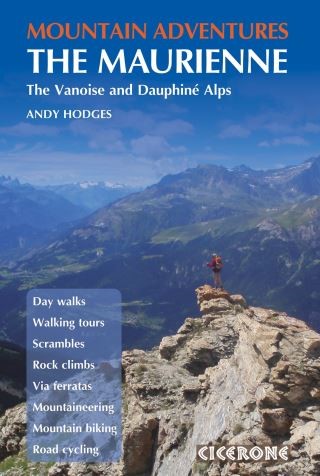 Mountain Adventures in the Maurienne

Summer routes for a multi-activity holiday in the French Alps

Multi-activity guidebook to the Haute Maurienne region of south east France. The book describes a wide range of the finest day walks, scrambles, rock climbs, via ferratas, treks and mountain biking and road cycling routes, offering all the inspiration needed for a multi-activity or family holiday. The Maurienne valley is served by good transport links, Modane serves as the gateway to the upper valley with links from Paris and Turin served by the TGV. Lanslebourg is the largest village after Modane and offers plenty of choice of accommodation, and Termignon is a reasonably central base for exploring the Haute Maurienne. Routes vary from pretty Alpine lake rambles to mammoth mountain bike routes and include the normal route to the summit of Dent Parrachee, the Matterhorn of the valley that can be reached without crossing a glacier, and arranged by difficulty. Information about facilities and grades for each activity are carefully explained and routes are illustrated with sketch maps, topos and profiles and inspiring photographs. The Vanoise massif is a beautiful range of mountains bounded by the valleys of the Maurienne and the Tarentaise. Sitting on the French-Italian border, the Upper Maurienne (Haute Maurienne) has a southern boundary bordering the Italian region of Piedmont. Its northern border is less pronounced, as the massif of the Vanoise blurs the boundary with the Tarentaise valley.

Andy Hodges: Andy Hodges was born in Wigan in 1967. He has been enjoying adventures in the outdoors since joining Cub Scouts in 1976. Learning to read a map and being allowed to tackle adventures were instrumental in nurturing a life long love for mountains. His student days allowed extended visits to the Provence region of France where he became a modern sports climber, while a summer holiday job saw him leading walking groups in the UK hills and mountains. He has been a volunteer member of Mountain Rescue for 16 years and is part of the Hasty Team, a fell running element of the rescue team. Since discovering the Vanoise in 2004 he and his wife Sue have climbed, walked and cycled hundreds of miles of this beautiful region. There are hundreds more still left to be explored