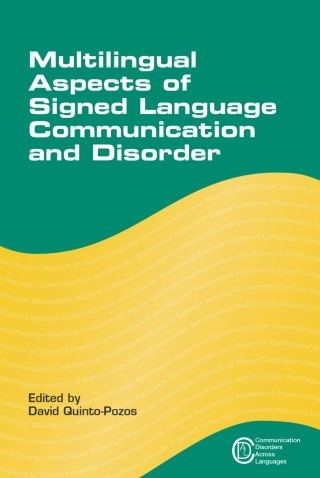 Inquiry into signed languages has added to what is known about structural variation and language, language learning, and cognitive processing of language. However, comparatively little research has focused on communication disorders in signed language users. For some deaf children, atypicality is viewed as a phase that they will outgrow, and this results in late identification of linguistic or cognitive deficits that might have been addressed earlier. This volume takes a step towards describing different types of atypicality in language communicated in the signed modality such as linguistic impairment caused by deficits in visual processing, difficulties with motor movements, and neurological decline. Chapters within the book also consider communication differences in hearing children acquiring signed and spoken languages.

David Quinto-Pozos: David Quinto-Pozos is an Assistant Professor in the Department of Linguistics, University of Texas at Austin, USA. His research focuses on signed language, communication disorder, language acquisition and the interaction between language and gesture in the signed modality.