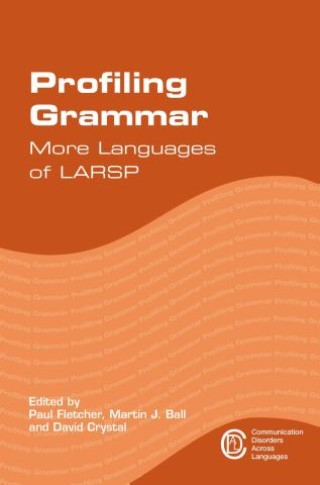 This book brings together twelve previously unpublished language profiles based on the original Language Assessment, Remediation and Screening Procedure (LARSP). The languages featured are: Afrikaans, Bulgarian, Cantonese, Finnish, Greek, Hindi, Hungarian, Japanese, Kannada, Korean, Malay and Swedish. Each chapter includes a grammatical sketch of the language, details of typical language development in speakers of the language, as well as a description of and justification for the profile itself. The book will be an invaluable resource for speech-language pathologists and others wishing to analyse the grammatical abilities of individuals speaking one of these languages. This new collection complements a previous book in this series on the same theme: Assessing Grammar: The Languages of LARSP (Ball et al., 2012,).

Paul Fletcher: Paul Fletcher is Emeritus Professor of Speech and Hearing Sciences at University College Cork, Ireland. Since the 1970s he has published widely on language development and language impairment in children speaking English, and more recently on those speaking Cantonese and Mandarin. His research focus, initially primarily on syntax, has broadened to include vocabulary, and the interaction between vocabulary and syntax in language development. He is the author, with Ciara O’Toole, of Language Development and Language Impairment: A Problem-based Introduction (2016).Martin J. Ball is Professor of Speech Language Pathology at Linköping University, Sweden. He is co-editor of the journal Clinical Linguistics and Phonetics (Taylor & Francis), and the book series Communication Disorders Across Languages (Multilingual Matters). His main research interests include sociolinguistics, clinical phonetics and phonology, and the Celtic languages.