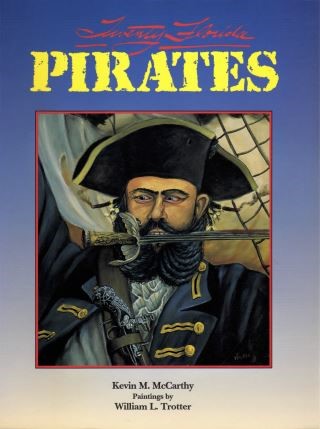 Blackbeard, Jose Gaspar, Jean Lafitte—the names conjure up a romantic, swashbuckling figure with a black patch over one eye, a cutlass in his teeth, and a brace of pistols tucked into his waistband. Actors such as Errol Flynn did much to create that devil-may-care attitude glamorized on the silver screen, but in fact, real pirates were not so admirable; for the most part they were cruel, greedy, dastardly brigands, many of whom were slave traders or smugglers in addition to being pirates. Still, we continue to be fascinated by their lives and exploits, perhaps because they led such adventurous lives full of bravery, recklessness and daring.

It is certainly more enjoyable— and safer—to read about pirates than to encounter one. This book chronicles the lives and times of 20 notable Florida pirates, from the English privateers of the 1500s to present-day drug smugglers and “yachtjackers." Pirates have always found easy prey in the seas around Florida; not only did the treasure-laden ships on their way back to Europe have to sail close to Florida's shores to catch the currents east, but the treacherous Florida Reef foundered many a ship, making easy pickings.

Most of what we know about pirates comes from Navy records, newspaper accounts, or eyewitness statements from those whom the pirates spared. This book distills the most interesting facts from many sources into a book that will be enjoyed by anyone interested in a different perspective on Florida's history.

Kevin M McCarthy: Kevin McCarthy is professor emeritus and a distinguished alumni professor of Florida studies and English at the University of Florida in Gainesville, where he taught for 33 years. He has written many books for Pineapple Press.