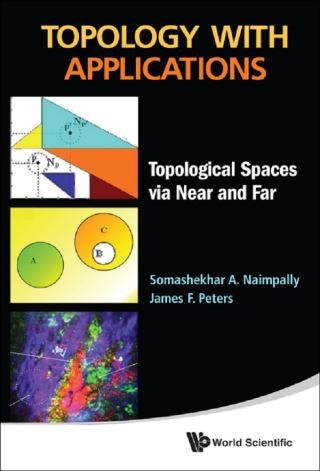 Topology With Applications: Topological Spaces Via Near And Far

Topological Spaces via Near and Far

The principal aim of this book is to introduce topology and its many applications viewed within a framework that includes a consideration of compactness, completeness, continuity, filters, function spaces, grills, clusters and bunches, hyperspace topologies, initial and final structures, metric spaces, metrization, nets, proximal continuity, proximity spaces, separation axioms, and uniform spaces.

It is the first complete presentation on topology with applications considered in the context of proximity spaces, and the nearness and remoteness of sets of objects. A novel feature throughout this book is the use of near and far, discovered by F Riesz over 100 years ago. In addition, it is the first time that this form of topology is presented in the context of a number of new applications.

Contents:
Readership: 3rd year undergraduate students, graduate students and researchers in topology; professional and practitioners who are interested in applying topology and its applications especially in science and engineering.