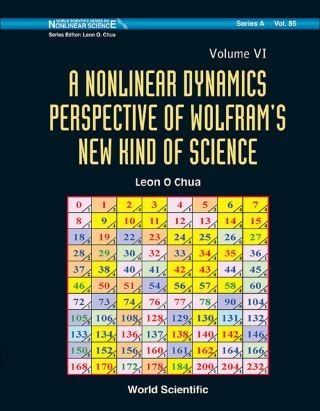 This invaluable volume ends the quest to uncover the secret recipes for predicting the long-term evolution of a ring of identical elementary cells where the binary state of each cell during each generation of an attractor (i.e. after the transients had disappeared) is determined uniquely by the state of its left and right neighbors in the previous generation, as decreed by one of 256 truth tables. As befitting the contents aimed at school children, it was found pedagogically appealing to code each truth table by coloring each of the 8 vertices of a cubical graph in red (for binary state 1), or blue (for binary state 0), forming a toy universe of 256 Boolean cubes, each bearing a different vertex color combination.

The corresponding collection of 256 distinct Boolean cubes are then segegrated logically into 6 distinct groups where members from each group share certain common dynamics which allow the long-term evolution of the color configuration of each bit string, of arbitrary length, to be predicted painlessly, via a toy-like gaming procedure, without involving any calculation. In particular, the evolution of any bit string bearing any initial color configuration which resides in any one of the possibly many distinct attractors, can be systematically predicted, by school children who are yet to learn arithmetic, via a simple recipe, for any Boolean cube belonging to group 1, 2, 3, or 4. The simple recipe for predicting the time-asymptotic behaviors of Boolean cubes belonging to groups 1, 2, and 3 has been covered in Vols. I, II, ..., V.

This final volume continues the recipe for each of the 108, out of 256, local rules, dubbed the Bernoulli rules, belonging to group 4. Here, for almost half of the toy universe, surprisingly simple recipes involving only the following three pieces of information are derived in Vol. VI; namely, a positive integer τ, a positive, or negative, integer σ, and a sign parameter β > 0, or β < 0. In particular, given any color configuration belonging to an attractor of any one of the 108 Boolean cubes from group 4, any child can predict the color configuration after τ generations, without any computation, by merely shifting each cell σ bits to the left (resp. right) if σ > 0 (resp. σ < 0), and then change the color of each cell if β < 0.

As in the five prior volumes, Vol. VI also contains simple recipes which are, in fact, general and original results from the abstract theory of 1-dimensional cellular automata. Indeed, both children and experts from cellular automata will find this volume to be as deep, refreshing, and entertaining, as the previous volumes.