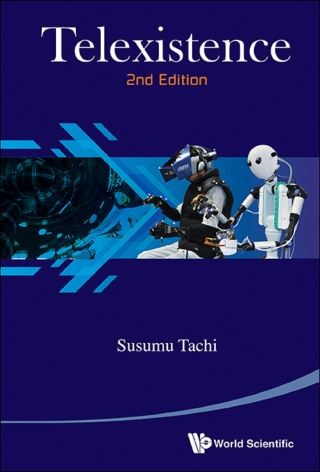 Telexistence is a fundamental concept which refers to the general technology that enables a human being to have the real-time sensation of being at a place other than where he or she actually exists, while being able to interact with the remote environment, which may be real, virtual, or a combination of both. It also refers to an advanced type of teleoperation system that enables an operator at the control to perform remote tasks dexterously with the feeling of existing in a surrogate robot working in a remote environment. Telexistence in the real remote environment through a virtual environment is also possible.

This book is the second edition of the original Telexistence; new contents cover recent advancements of the technology in areas such as human augmentation, autostereoscopy, tangible visuo-haptic 3D display, face-to-face communication, and haptic sensations and technologies. Case studies of the mobile mutual telexistence system TELESAR IV and haptic telexistence avatar system TELESAR V are also included. Written by the inventor of the concept of this emerging technology, it introduces the concept of telexistence, explains how this concept can be realized, illustrates precisely real examples of the realization of the concept, and determines its future advancement. Readers will be inspired by the concept, and acquire appropriate knowledge on this emerging technology and the fundamental skills to contribute in further development of telexistence.