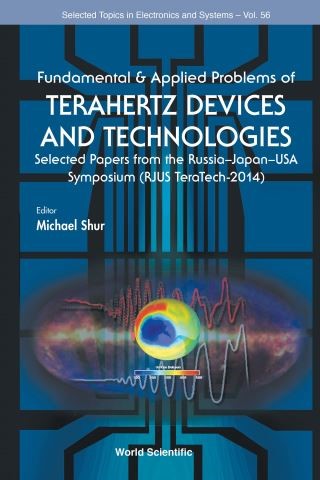 This book brings together seven selected best papers presented at the 2014 Russia–Japan–USA Symposium on Fundamental and Applied Problems of Terahertz Devices and Technologies (RJUS TeraTech-2014), which was held at the University of Buffalo, New York, USA on 17–21 June 2014.

As the third in the series of annual meetings, RJUS TeraTech-2014 continues to be an excellent platform for researchers to exchange their recent original results, and to deal with the technical challenges and barriers of transitioning the research results into the THz system-level applications. The symposium focuses on 2 main areas, namely, interaction of THz radiation with micro- and nano-structures, and advanced solid-state THz emitters and sensors. Leading experts from academia, industry, and government agencies from three countries, including USA, Japan, and Russia, contributed to the collection of research results and developments.

This book, covering issues ranging from basic Thz-related phenomena to applications in sensing, imaging, and communications, contains some ground-breaking works in the industry, and will be a useful reference for device and electronics engineers and scientists.