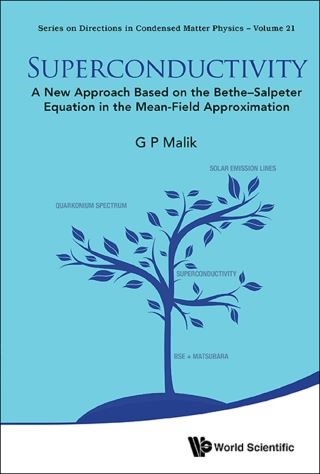 Superconductivity: A New Approach Based On The Bethe-salpeter Equation In The Mean-field Approximation

Given the Debye temperature of an elemental superconductor (SC) and its Tc, BCS theory enables one to predict the value of its gap Δ0 at T = 0, or vice versa. This monograph shows that non-elemental SCs can be similarly dealt with via the generalized BCS equations (GBCSEs) which, given any two parameters of the set {Tc, Δ10, Δ20 > Δ10}, enable one to predict the third. Also given herein are new equations for the critical magnetic field and critical current density of an elemental and a non-elemental SC — equations that are derived directly from those that govern pairing in them.

The monograph includes topics that are usually not covered in any one text on superconductivity, e.g., BCS-BEC crossover physics, the long-standing puzzle posed by SrTiO3, and heavy-fermion superconductors — all of which are still imperfectly understood and therefore continue to avidly engage theoreticians. It suggests that addressing the Tcs, Δs and other properties (e.g., number densities of charge carriers) of high-Tc SCs via GBCSEs incorporating chemical potential may lead to tangible clues about raising their Tcs. The final chapter in this monograph deals with solar emission lines and quarkonium spectra because of a feature common between them and superconductivity: existence of a bound state in a medium at finite temperature. This is a problem on which the author has worked for more than 25 years. The treatment in the text is elementary — even those who have only a cursory familiarity with Feynman diagrams should be able to follow it without much difficulty.