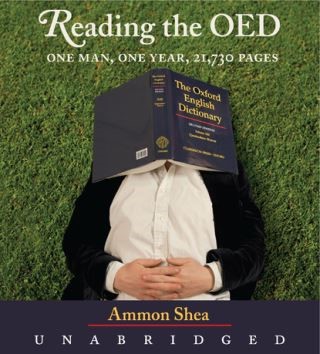 "I'm reading the OED so you don't have to. If you are interested in vocabulary that is both spectacularly useful and beautifully useless, read on..."

So reports Ammon Shea, the tireless, word-obsessed, and more than slightly masochistic author of Reading the OED. The word lover's Mount Everest, the OED has enthralled logophiles since its initial publication 80 years ago. Weighing in at 137 pounds, it is the dictionary to end all dictionaries.

In 26 chapters filled with sharp wit, sheer delight, and a documentarian's keen eye, Shea shares his year inside the OED, delivering a hair-pulling, eye-crossing account of reading every word, and revealing the most obscure, hilarious, and wonderful gems he discovers along the way.

Ammon Shea is the author of two previous books on obscure words, Depraved English and Insulting English (written with Peter Novobatzky). He read his first dictionary, Merriam Webster's Second International, ten years ago, and followed it up with the sequel, Webster's Third International.