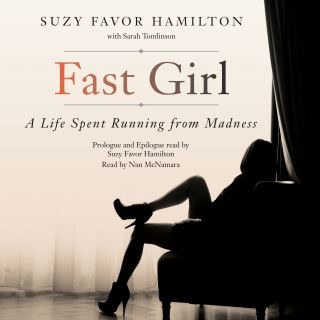 A Life Spent Running from Madness

The former middle distance Olympic runner and high-end escort speaks out for the first time about her battle with mental illness, and how mania controlled and compelled her in competition, but also in life. This is a heartbreakingly honest yet hopeful memoir reminiscent of Manic, Electroboy, and An Unquiet Mind.

During the 1990s, three-time Olympian Suzy Favor Hamilton was the darling of American track and field. An outstanding runner, a major sports apparel spokesperson, and a happily married wife, she was the model for an active, healthy, and wholesome life. But her perfect facade masked a dark truth: manic depression and bipolar disorder that drove her obsession to perform and win. For years after leaving the track, Suzy wrestled with her condition, as well as the loss of a close friend, conflicted feelings about motherhood and her marriage, and lingering shame about her athletic career. After a misdiagnosis and a recommendation for medication that only exacerbated her mania and made her hypersexual, Suzy embarked on a new path, and assumed a new identity. Fueled by a newfound confidence, a feeling of strength and independence and a desire she couldn’t tamp down, she became a high-priced escort in Las Vegas, working as “Kelly.”

But Suzy could not keep her double life a secret forever. When it was eventually exposed, it sent her into a reckless suicidal period where the only option seemed out. Finally, with the help of her devoted husband, Suzy finally got the proper medical help she needed. In this startling frank memoir, she recounts the journey to outrun her demons, revealing how a woman used to physically controlling her body learned to come to terms with her unstable mind. It is the story of a how a supreme competitor scored her most important victory of all—reclaiming her life from the ravages of an untreated mental illness. Today, thanks to diagnosis, therapy, Kelly has stepped into the shadows, but Suzy is building a better life, one day at a time. Sharing her story, Suzy is determined to raise awareness, provide understanding, and offer inspiration to others coping with their own challenges.

Suzy Favor Hamilton is a three-time Olympian for women's middle distance running. She is a sought-after public speaker—addressing eating disorders, mental illness, and the struggles that young athletes face—as well as a yoga instructor. Favor Hamilton lives in California and Wisconsin.

Suzy Favor Hamilton is a three-time Olympian for women's middle distance running. She is a sought-after public speaker—addressing eating disorders, mental illness, and the struggles that young athletes face—as well as a yoga instructor. Favor Hamilton lives in California and Wisconsin.