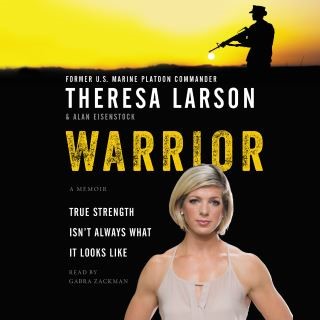 In this inspiring memoir, a former female Marine platoon leader recalls the wars she has fought—on the playing field, the battlefield, and inside her own soul—revealing how overcoming the harrowing circumstances in her life helped her ultimately redefine what it means to be strong and what “perfect” really is.

Theresa Larson has lived multiple lives. At ten she was a caregiver to her dying mother. As an adolescent, an All-Star high school, college, and professional softball player. As a young adult, a fitness competition winner, beauty pageant contestant, and model. And as a grown woman, a high-achieving Lieutenant in the Marines, in charge of an entire platoon while deployed in Iraq.

Meanwhile, Theresa was battling bulimia nervosa, an internal struggle which ultimately cut short her military service when she was voluntarily evacuated from combat. Theresa’s journey to wellness required the bravery to ask for help, to take care of herself first, and abandon the idea of “perfect.” In Warrior, she lays bare all of these lives in intimate and vivid detail, examining extremely personal and sometime painful moments and how, by finally accepting the help of others, she learned to make herself whole. From growing up in a log cabin outside Seattle to facing down the enemy in Iraq, Theresa’s journey demonstrates that good health and happiness is a daily, intentional act that requires persistence and commitment.

Theresa hopes that through sharing her story, she will help inspire others to empower themselves, embrace their inner warrior and re-define strength. Startling and funny, terrifying and triumphant, heartbreaking and inspirational, Warrior is at heart a story of perseverance and success—of a determined woman who is model for everyone struggling to conquer their own demons. Theresa shows that asking for help can be an act of courage, and that we are stronger than we think when faced with seemingly impossible odds.

Theresa Larson has been a professional softball player, an award-winning fitness competition contestant, and a lieutenant in the Marines, where she led an entire platoon while deployed in Iraq. She is now a doctor of physical therapy and the founder of Movement Rx, offering support to wounded warriors and individuals with movement issues. Theresa travels all over the world as a speaker for the CrossFit Movement and Mobility course and is a consultant for the world-renowned MobilityWOD. She is a lululemon athletica ambassador, a LALO Tactical ambassador, and works with Team Red, White & Blue, LinderKids, The Resilience Project, the National Eating Disorders Association, and other nonprofits. She lives in San Diego, California.

Alan Eisenstock is the author of Ten on Sunday: The Secret Life of Men, Sports Talk: A Journey Inside the World of Sports Talk Radio, and Inside the Meat Grinder. In a career spanning twenty-five years, he has written movies, plays, magazine articles, and television shows. He lives in California.