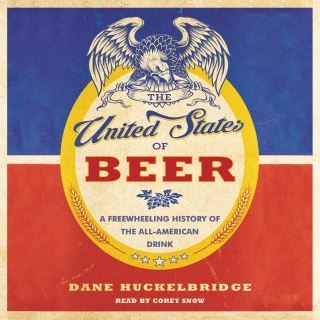 The United States of Beer

A Freewheeling History of the All-American Drink

From the author of Bourbon, “the definitive history” (Sacramento Bee), comes the rollicking and revealing story of beer in America, in the spirit of Salt or Cod.

In The United States of Beer, Dane Huckelbridge, the author of Bourbon: A History of the American Spirit—a Southern Independent Booksellers Alliance bestseller—charts the surprisingly fascinating history of Americans’ relationship with their most popular alcoholic beverage. Huckelbridge shows how beer has evolved along with the country—from a local and regional product (once upon a time every American city has its own brewery and iconic beer brand) to the rise of global mega-brands like Budweiser and Miller that are synonymous with U.S. capitalism.

We learn of George Washington’s failed attempt to brew beer at Mount Vernon with molasses instead of barley, of the 19th century “Beer Barons” like Captain Frederick Pabst, Adolphus Busch, and Joseph Schlitz who revolutionized commercial brewing and built lucrative empires—and the American immigrant experience—and of the advances in brewing and bottling technology that allowed beer to flow in the saloons of the Wild West. Throughout, Huckelbridge draws connections between seemingly remote fragments of the American past, and shares his reports from the frontlines of today’s craft-brewing revolution.

Dane Huckelbridge has written for the Wall Street Journal, Tin House, The New Republic, and New Delta Review. He is the author of Bourbon: A History of the American Spirit; The United States of Beer: The True Tale of How Beer Conquered America, From B.C. to Budweiser and Beyond; and a novel, Castle of Water, which has been optioned for film. A graduate of Princeton University, he lives in Paris.