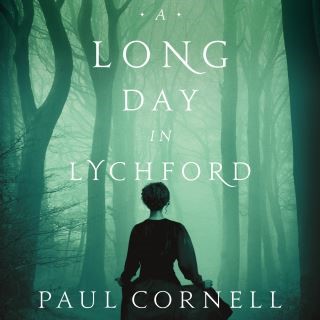 A Long Day in Lychford

A Long Day in Lychford is the third audiobook in Paul Cornell's increasingly popular Witches of Lychford series.

It's a period of turmoil in Britain, with the country's politicians electing to remove the UK from the European Union, despite ever-increasing evidence that the public no longer supports it. And the small town of Lychford is suffering.

But what can three rural witches do to guard against the unknown? And why are unwary hikers being led over the magical borders by their smartphones' mapping software? And is the immigration question really important enough to kill for?

Paul Cornell: Paul Cornell is a writer of science fiction and fantasy in prose, comics and television, one of only two people to be Hugo Award nominated for all three media. A New York Times #1 Bestselling author, he's written Doctor Who for the BBC, Wolverine for Marvel, and Batman & Robin for DC. He is the author of the Witches of Lychford series for Tor.com Publishing. He's won the BSFA Award for his short fiction, an Eagle Award for his comics, and shares in Writer's Guild Award for his TV work.Robin Miles began her audiobook narration in 1994.  She's read over 130 titles covering many different genres and has won multiple Earphones awards.  Her many audiobook credits include Augusten Burroughs's Sellevision, Edwidge Danticat's Brother I'm Dying, and Lalita Tademy's Cane River.  Her film and television credits include The Last Days of Disco, Primary Colors, Law & Order: Criminal Intent, Law & Order, New York Undercover, National Geographic’s Tales from the Wild, All My Children, and One Life to Live.  She regularly gives seminars to members of SAG and AFTRA actors' unions, and in 2005 she started Narration Arts Workshop in New York City, offering audiobook recording classes and coaching.  She holds a B.A. in Theater Studies from Yale University, an MFA in acting from the Yale School of Drama, and a certificate from the British American Drama Academy in England.