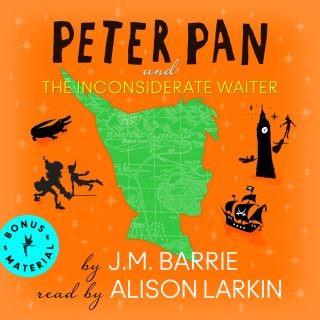 Peter Pan and The Inconsiderate Waiter

Hailed by The Times (London) as "hugely entertaining - marvelously light-footed":, award winning narrator Alison Larkin brings her signature wit and charm to this Audiofile Earphones Award winning recording.
“The well-known characters in the much-loved story of PETER PAN are enlivened with humor and excitement in this gem. Narrator Alison Larkin breathes a unique personality and voice into each character. Peter's cockiness, Tink's spunk, Hook's rants, and all the other distinctive voices combine for an enjoyable listening experience. The icing on the cake is the less-well-known-short story THE INCONSIDERATE WAITER, a humorous look at the British class system of 1898." Audiofile Magazine
Peter Pan
'All children, except one, grow up.' When Peter flies into the Darling home looking for his shadow he teaches Wendy, John and Michael how to fly with him back to the island of Neverland. There they embark on an 'awfully big adventure.'
The Inconsiderate Waiter
In the world of the Victorian Club, it does not do for a gentleman to be seen to take an interest in any member of the working class. How dreadfully inconvenient then, when the narrator's waiter begins to display alarming tendencies towards having a personality, and feelings of his own. The last thing any respectable gentleman should do is permit himself to be drawn into this dubious world...let alone entertain emotions such as interest or empathy for a member of the lower class.
Additional Content:
Alison Larkin on Peter Pan and life 'betwixt and between' England and America.
Title and end music by Emmy Award-winning composer, Gary Schriener.