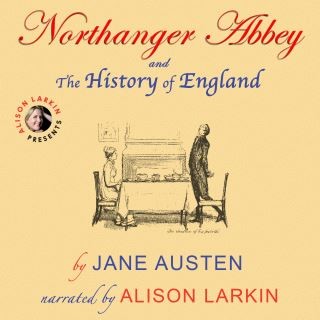 Northanger Abbey and The History of England by Jane Austen

Award-winning narrator and internationally acclaimed writer/comedienne, Alison Larkin brings her signature wit to this dazzling audio production of Jane Austen's first novel, Northanger Abbey, followed by The History of England, a short, delightfully satirical piece that Austen wrote when she was just fifteen years old.
In Northanger Abbey, Catherine Morland, a clergyman's daughter, longs for the kind of romantic adventures she has read about in her favorite Gothic novels. After spending a season mingling with fashionable high society in Bath, she is invited to stay at Northanger Abbey where nothing is what it seems.
In The History of England, the teenage Jane Austen pokes fun at the historians of the day who pretended to be objective when they clearly were not, and wrote about the kings and queens of England with less respect (and more wit) than a British newspaper.
"Larkin approaches Austen as a satirist. She has genuine theatrical skill...sustained comic creations. The voice reveals all."—The New Yorker
"There's a vintage feel to Alison Larkin's narration. The bell-like quality of her sweetly accented voice harkens back to another, quieter, time. However, her delivery offers a flexibility that is contemporary and easy to hear..."—AudioFile magazine
"Ms. Larkin's voice is perfectly suited to Jane Austen's work... her range is phenomenal..."—Rakes and Rascals