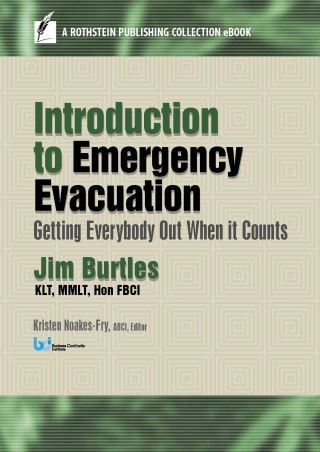 Getting Everybody Out When it Counts

When it’s not just a drill, you need to get it right the first time. If an emergency alert sounds, are you ready to take charge and get everyone out of the office, theatre, classroom, or store safely? In Introduction to Emergency Evacuation: Getting Everybody Out When it Counts, Jim Burtles explains the practical basics of understanding your site, planning escape routes, and providing for people with special needs. When minutes count, you will be ready to take action!

From 30+ years of working with organizations like yours, Burtles knows the challenges you face. He tells you what you need to know as you plan to evacuate people of all ages and health conditions – whether it’s from small offices, skyscrapers, stores, industrial plants, hospitals, college campuses, or other venues. In this short book, Burtles tells you how to:

Finally, to save you time in your emergency planning, Burtles ends the book ends with a bonus comprehensive “Emergency Evacuation Checklist” containing the essentials you need to make sure your plan covers everything you need.

Jim Burtles KLJ, MMLJ, Hon FBCI is a well-known and respected leader within the business continuity profession. Now semi-retired and living in West London, he can look back and reflect upon the lessons learned from a wealth of experience gained in some 40 years of practice, spread across 4 continents and 24 countries. He was granted Freedom of the City of London in 1992, received a Lifetime Achievement Award in 2001, and was awarded an Honorary Fellowship by the Business Continuity Institute (BCI) in 2010. In 2005, he was granted the rank of a Knight of Grace in the Military and Hospitaller Order of St. Lazarus of Jerusalem, an ancient and charitable order which cares for those afflicted with leprosy and similar debilitating diseases.

Working as an IBM field engineer, in the mid-70s he took on the role of a rescue engineer, helping customers recover their damaged systems in the wake of fires, floods, and bombings. This type of work was the beginning of what later became known as disaster recovery. During the 80s, he became an early pioneer of what was then the emerging business continuity profession. In 1994 he helped to found the Business Continuity Institute (BCI) and now serves on its Global Membership Council, representing the interests of the worldwide membership. His practical experience includes hands-on recovery work with victims of traumatic events such as explosions, earthquakes, storms, and fires. This includes technical assistance and support in 90-odd disasters, as well as advice and guidance for clients in over 200 emergency situations.

Over the past 40 years, Jim Burtles has introduced more than 3,500 people into the business continuity profession through formal training programs and has provided specialist training for another 800 or so through workshops covering specific subjects or skill areas. For several years he was a regular visiting lecturer at Coventry University.

Recent published works include Coping with a Crisis: A Counselor’s Guide to the Restabilization Process, 2011, Emergency Evacuation Planning for Your Workplace: From Chaos to Life-Saving Solutions, Rothstein Publishing 2014, and Principles and Practice of Business Continuity: Tools and Techniques, 2nd Edition, Rothstein Publishing, 2016.

Kristen Noakes-Fry, ABCI, is Executive Editor at Rothstein Publishing. Previously, she was a Research Director, Information Security and Risk Group, for Gartner, Inc.; Associate Editor at Datapro (McGraw- Hill); and Associate Professor of English at Atlantic Cape College in New Jersey. She holds an M.A. from New York University and a B.A. from Russell Sage College.