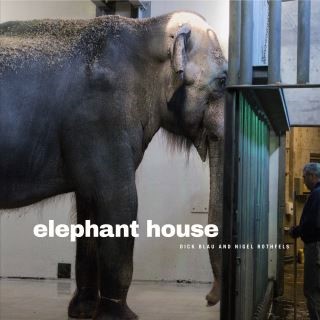 In Elephant House, photographer Dick Blau and historian Nigel Rothfels offer a thought-provoking study of the Oregon Zoo’s Asian Elephant Building and the daily routines of its residents—human and pachyderm alike. Without an agenda beyond a desire to build a deeper understanding of this enigmatic environment, Elephant House is the result of the authors’ unique creative collaboration and explores the relationships between captive elephants and their human caregivers.

Blau’s evocative photographs are complex and challenging, while Rothfels’s text offers a scholarly and personal response to the questions that surround elephants and captivity. Elephant House does not take sides in the debate over zoos but focuses instead on the bonds of attentiveness between the animals and their keepers. Accompanied by a foreword from retired elephant keeper Mike Keele, Elephant House is a frank, fascinating look at the evolving world of elephant husbandry.

Dick Blau: Dick Blau, a photographer and filmmaker, is a coauthor of Skyros Carnival, Bright Balkan Morning, and Polka Happiness, three photo-ethnographies that look at the transformative power of music and dance. His work on familial emotion is featured in Jane Gallop's Living with His Camera, readings in the theory of domestic photography.Nigel Rothfels is a historian of animals and culture. He is the author of Savages and Beasts: The Birth of the Modern Zoo, which examines the origins of naturalistic displays in zoos; the editor of Representing Animals, a foundational interdisciplinary collection in the field of animal studies; and the editor of Animalibus, Penn State Press’s scholarly series about animals and culture.