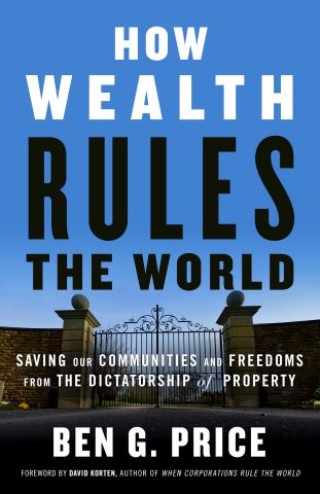 How Wealth Rules the World

Saving Our Communities and Freedoms from the Dictatorship of Property

Crackdowns on local democracy are accelerating, as corporate and state interests continue efforts to repress social movements. In this well-timed book, Ben Price presciently reveals structures of power and law that facilitate blatant corporate supremacy in the United States. Price uses his years of experience as a community organizer and a careful reading of history to show how a legal paradigm that facilitated slavery and the fossil fuel economy has endured and adapted over time – today barricading our communities and squelching dissent.

Many books have been written about wealth, power and politics in the United States. Most of them make intuitive sense. Wealthy people use their power to influence and control politics. But Ben Price's new book is often counterintuitive as he explores how wealth itself is imbued with power. He answers questions such as:

How is the American Legislative Exchange Council – a modern states' rights, free market capitalist group – the intellectual and political descendant of George Washington's Federalist Party?
How was the Fourteenth Amendment that emancipated African American slaves from their status as property used by a reactionary Supreme Court to grant legal “personhood” to private corporations?
How are cities seen under our legal doctrine as “public corporations,” devoid of real governing authority?

Further, Price identifies key counterrevolutions in U.S. history that squelched the transformative potential of the Civil War and American Revolution, and traces the roots of colonial and imperial systems of control. He links them to modern “free trade” agreements and other antidemocratic structures used to supersede democracy to this day.

For some, this will come as no surprise. For others, it will be a rude, though necessary, awakening. “The white man's municipalities are just reservations, like ours,” said a resident of Pine Ridge Reservation, who Price spoke with. "The difference is, we know we live on reservations. The white man doesn't.”

Crucially, Price shares insight into how social movements can plant seeds of a new legal system that makes the liberty, civil rights and dignity of humans and ecosystems its ultimate purpose. In fact, he introduces the reader to people who are doing just that.

Ben G. Price: Ben Price is the Community Environmental Legal Defense Fund’s (CELDF) National Organizing Director, with fifteen years of experience organizing communities and coordinating organizers across the country to challenge state and federal legalization of corporate assaults against people and their environments. Ben worked closely with Tamaqua Borough, Pennsylvania, the first community on earth to recognize legal rights for ecosystems, and with the City Council of Pittsburgh, PA to adopt a community bill of rights banning fracking, directly challenging state preemption of local control over oil and gas corporations. Prior to teaming up with CELDF, Ben worked in the corporate world while also serving as President of the Pennsylvania Consumer Action Network (PCAN).