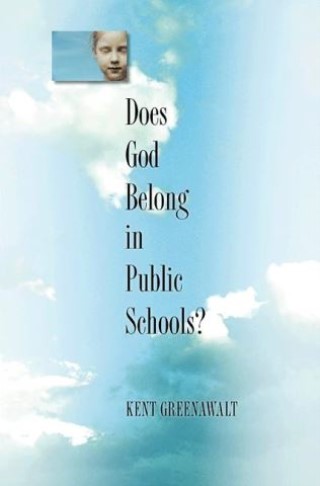 Does God Belong in Public Schools?

Controversial Supreme Court decisions have barred organized school prayer, but neither the Court nor public policy exclude religion from schools altogether. In this book, one of America's leading constitutional scholars asks what role religion ought to play in public schools. Kent Greenawalt explores many of the most divisive issues in educational debate, including teaching about the origins of life, sex education, and when--or whether--students can opt out of school activities for religious reasons.

Using these and other case studies, Greenawalt considers how to balance the country's constitutional commitment to personal freedoms and to the separation of church and state with the vital role that religion has always played in American society. Do we risk distorting students' understanding of America's past and present by ignoring religion in public-school curricula? When does teaching about religion cross the line into the promotion of religion?

Tracing the historical development of religion within public schools and considering every major Supreme Court case, Greenawalt concludes that the bans on school prayer and the teaching of creationism are justified, and that the court should more closely examine such activities as the singing of religious songs and student papers on religious topics. He also argues that students ought to be taught more about religion--both its contributions and shortcomings--especially in courses in history. To do otherwise, he writes, is to present a seriously distorted picture of society and indirectly to be other than neutral in presenting secularism and religion.

Written with exemplary clarity and even-handedness, this is a major book about some of the most pressing and contentious issues in educational policy and constitutional law today.

Kent Greenawalt: Kent Greenawalt is University Professor teaching at the Columbia University School of Law, and a former Deputy Solicitor General of the United States. He is the author of Religious Convictions and Political Choice, Private Consciences and Public Reasons, Fighting Words (Princeton), and Religion and the Constitution: Volume 1: Free Exercise and Fairness (also Princeton).