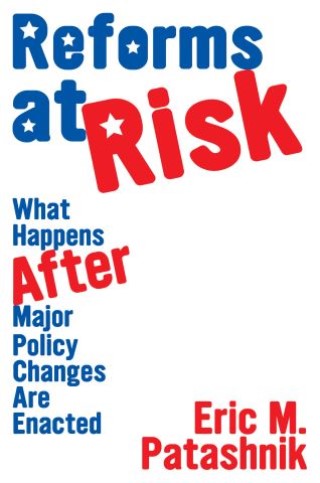 Reforms at Risk is the first book to closely examine what happens to sweeping and seemingly successful policy reforms after they are passed. Most books focus on the politics of reform adoption, yet as Eric Patashnik shows here, the political struggle does not end when major reforms become enacted. Why do certain highly praised policy reforms endure while others are quietly reversed or eroded away?

Patashnik peers into some of the most critical arenas of domestic-policy reform--including taxes, agricultural subsidies, airline deregulation, emissions trading, welfare state reform, and reform of government procurement--to identify the factors that enable reform measures to survive. He argues that the reforms that stick destroy an existing policy subsystem and reconfigure the political dynamic. Patashnik demonstrates that sustainable reforms create positive policy feedbacks, transform institutions, and often unleash the ''creative destructiveness'' of market forces.

Reforms at Risk debunks the argument that reforms inevitably fail because Congress is prey to special interests, and the book provides a more realistic portrait of the possibilities and limits of positive change in American government. It is essential reading for scholars and practitioners of U.S. politics and public policy, offering practical lessons for anyone who wants to ensure that hard-fought reform victories survive.

Eric M. Patashnik: Eric M. Patashnik is associate professor of politics at the University of Virginia. His books include Putting Trust in the US Budget: Federal Trust Funds and the Politics of Commitment.