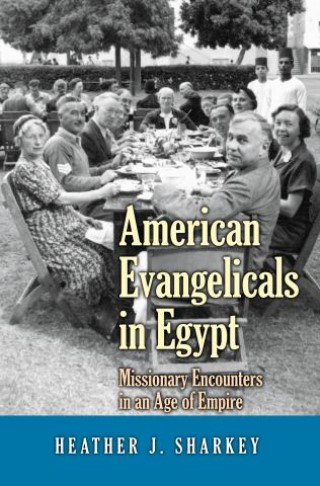 Missionary Encounters in an Age of Empire

In 1854, American Presbyterian missionaries arrived in Egypt as part of a larger Anglo-American Protestant movement aiming for worldwide evangelization. Protected by British imperial power, and later by mounting American global influence, their enterprise flourished during the next century. American Evangelicals in Egypt follows the ongoing and often unexpected transformations initiated by missionary activities between the mid-nineteenth century and 1967--when the Six-Day Arab-Israeli War uprooted the Americans in Egypt.

Heather Sharkey uses Arabic and English sources to shed light on the many facets of missionary encounters with Egyptians. These occurred through institutions, such as schools and hospitals, and through literacy programs and rural development projects that anticipated later efforts of NGOs. To Egyptian Muslims and Coptic Christians, missionaries presented new models for civic participation and for women's roles in collective worship and community life. At the same time, missionary efforts to convert Muslims and reform Copts stimulated new forms of Egyptian social activism and prompted nationalists to enact laws restricting missionary activities. Faced by Islamic strictures and customs regarding apostasy and conversion, and by expectations regarding the proper structure of Christian-Muslim relations, missionaries in Egypt set off debates about religious liberty that reverberate even today. Ultimately, the missionary experience in Egypt led to reconsiderations of mission policy and evangelism in ways that had long-term repercussions for the culture of American Protestantism.

Heather J. Sharkey: Heather J. Sharkey is an assistant professor in the Department of Near Eastern Languages and Civilizations at the University of Pennsylvania. She is the author of Living with Colonialism: Nationalism and Culture in the Anglo-Egyptian Sudan.