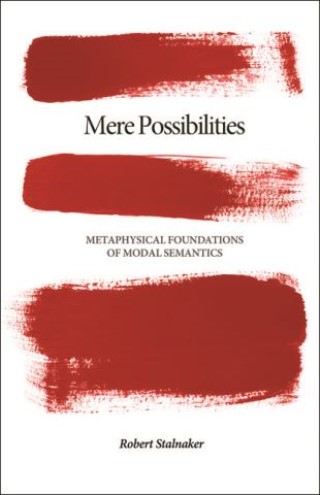 It seems reasonable to believe that there might have existed things other than those that in fact exist, or have existed. But how should we understand such claims? Standard semantic theories exploit the Leibnizian metaphor of a set of all possible worlds: a proposition might or must be true if it is true in some or all possible worlds. The actualist, who believes that nothing exists except what actually exists, prefers to talk of possible states of the world, or of ways that a world might be. But even the actualist still faces the problem of explaining what we are talking about when we talk about the domains of other possible worlds. In Mere Possibilities, Robert Stalnaker develops a framework for clarifying this problem, and explores a number of actualist strategies for solving it.

Some philosophers have hypothesized a realm of individual essences that stand as proxies for all merely possible beings. Others have argued that we are committed to the necessary existence of everything that does or might exist. In contrast, Mere Possibilities shows how we can make sense of ordinary beliefs about what might and must exist without making counterintuitive metaphysical commitments. The book also sheds new light on the nature of metaphysical theorizing by exploring the interaction of semantic and metaphysical issues, the connections between different metaphysical issues, and the nature of ontological commitment.

Robert Stalnaker: Robert Stalnaker is the Laurance S. Rockefeller Professor of Philosophy at Massachusetts Institute of Technology. He is the author of Our Knowledge of the Internal World, Ways a World Might Be, Context and Content, and Inquiry.