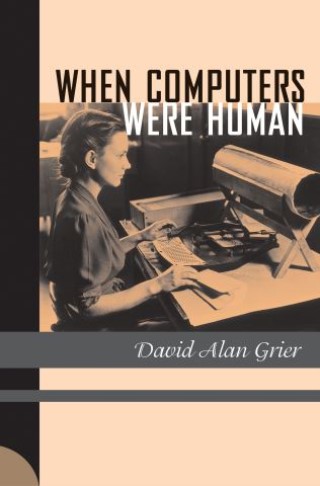 When Computers Were Human

Before Palm Pilots and iPods, PCs and laptops, the term "computer" referred to the people who did scientific calculations by hand. These workers were neither calculating geniuses nor idiot savants but knowledgeable people who, in other circumstances, might have become scientists in their own right. When Computers Were Human represents the first in-depth account of this little-known, 200-year epoch in the history of science and technology.

Beginning with the story of his own grandmother, who was trained as a human computer, David Alan Grier provides a poignant introduction to the wider world of women and men who did the hard computational labor of science. His grandmother's casual remark, "I wish I'd used my calculus," hinted at a career deferred and an education forgotten, a secret life unappreciated; like many highly educated women of her generation, she studied to become a human computer because nothing else would offer her a place in the scientific world.

The book begins with the return of Halley's comet in 1758 and the effort of three French astronomers to compute its orbit. It ends four cycles later, with a UNIVAC electronic computer projecting the 1986 orbit. In between, Grier tells us about the surveyors of the French Revolution, describes the calculating machines of Charles Babbage, and guides the reader through the Great Depression to marvel at the giant computing room of the Works Progress Administration.

When Computers Were Human is the sad but lyrical story of workers who gladly did the hard labor of research calculation in the hope that they might be part of the scientific community. In the end, they were rewarded by a new electronic machine that took the place and the name of those who were, once, the computers.

David Alan Grier: David Alan Grier is Associate Professor in the Center for International Science and Technology Policy at George Washington University. His articles on the history of science have appeared in the American Mathematical Monthly, Chance, the Christian Science Monitor, and the Washington Post. He is Editor in Chief of the IEEE Annals of the History of Computing. Long before he learned that his grandmother had been trained as a human computer, he absorbed the methods of programming the electronic computer from his father, who was a scientific computing specialist for the Burroughs Corporation.