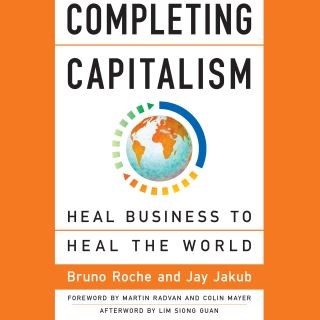 Heal Business to Heal the World

For the past fifty years, leaders in the business world have believed that their sole responsibility is to maximize profit for shareholders. But this obsessive focus was a major cause of the abuses that nearly sunk the global economy in 2008. In this analytically rigorous and eminently practical book, Bruno Roche and Jay Jakub offer a more complete form of capitalism, one that delivers superior financial performance precisely because it mobilizes and generates human, social, and natural capital along with financial capital. They describe how the model has been implemented in live business pilots in Africa, Asia, and elsewhere. Recent high-profile books like Capital in the Twenty-First Century have exposed financial capitalism's shortcomings, but this book goes far beyond by describing a well-developed, field-tested alternative.

Bruno Roche: Bruno Roche has been the chief economist of Mars, Inc., since 2006 and leads Catalyst, a global thought leadership capability and internal think tank for Mars, Inc., where the ideas in this book were first proposed. Roche also is part of the World Economic Forum.Jay Jakub is the senior director of external research at Mars, Inc./Catalyst. He joined the Catalyst corporate think tank in 2007 and coleads with Roche this pioneering new business model initiative. He is also the author of Spies and Saboteurs.