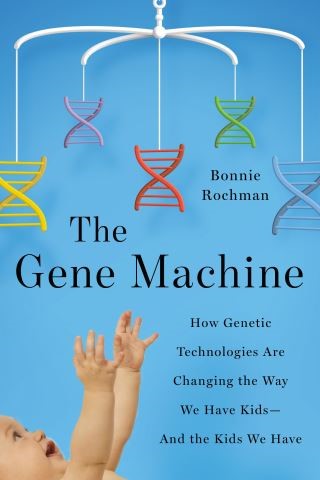 Is screening for disease in an embryo a humane form of family planning or a slippery slope toward eugenics? Should doctors tell you that your infant daughter is genetically predisposed to breast cancer? If tests revealed that your toddler has a genetic mutation whose significance isn’t clear, would you want to know?

In The Gene Machine, the award-winning journalist Bonnie Rochman deftly explores these hot-button questions, guiding us through the new frontier of gene technology and how it is transforming medicine, bioethics, health care, and the factors that shape a family. Rochman tells the stories of scientists working to unlock the secrets of the human genome; genetic counselors and spiritual advisers guiding mothers and fathers through life-changing choices; and, of course, parents (including Rochman herself) grappling with revelations that are sometimes joyous, sometimes heartbreaking, but always profound. She navigates the dizzying and constantly expanding array of prenatal and postnatal tests, from carrier screening to genome sequencing, while considering how access to more tests is altering perceptions of disability and changing the conversation about what sort of life is worth living and who draws the line. Along the way, she highlights the most urgent ethical quandary: Is this technology a triumph of modern medicine or a Pandora’s box of possibilities?

Propelled by human narratives and meticulously reported, The Gene Machine is both a scientific road map and a meditation on our power to shape the future. It is a book that gets to the very core of what it means to be human.

Bonnie Rochman: Bonnie Rochman is an award-winning journalist. A former health and parenting columnist for Time.com and staff writer for Time magazine, she has written for The New York Times Magazine, The Wall Street Journal, MIT Technology Review, Scientific American, and O, The Oprah Magazine. She lives in Seattle with her husband and three children.