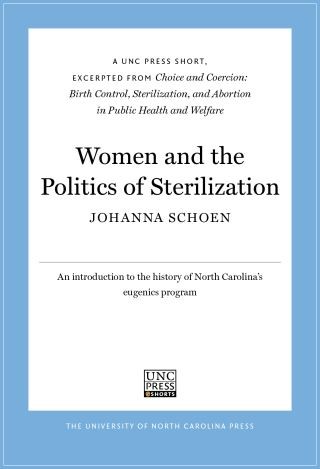 Women and the Politics of Sterilization

A UNC Press Short, Excerpted from Choice and Coercion: Birth Control, Sterilization, and Abortion in Public Health and Welfare

In 2003, North Carolina became the third U.S. state to apologize and the first to call for compensation to victims of state-ordered sterilizations carried out between 1929 and 1975. The decision was prompted largely by a series of articles in the Winston-Salem Journal. The stories were inspired in part by the meticulous research of Johanna Schoen, who was granted unique access to the papers of the North Carolina Eugenics Board and to summaries of the case histories of nearly 7600 victims--men, women, and children as young as ten years old--most of whom had been sterilized without their consent. In 2011, a gubernatorial task force held public hearings to gather testimony from the victims and their families before recommending in early 2012 that each living victim be granted $50,000 compensation. The restitution proposal requires legislative approval before funds can be dispersed.

In this UNC Press Short, excerpted from Choice and Coercion, Schoen explains the legal construction of North Carolina's sterilization program, which lasted far longer than similar programs in other states, and demonstrates through the stories of several women how the state was able to deny women who were poor, uneducated, African American, or "promiscuous" reproductive autonomy in multiple ways.

UNC Press Shorts excerpt compelling, shorter narratives from selected best-selling books published by the University of North Carolina Press and present them as engaging, quick reads. Presented exclusively as e-books, these shorts present essential concepts, defining moments, and concise introductions to topics. They are intended to stir the imagination and courage exploration of the original publications from which they are drawn.