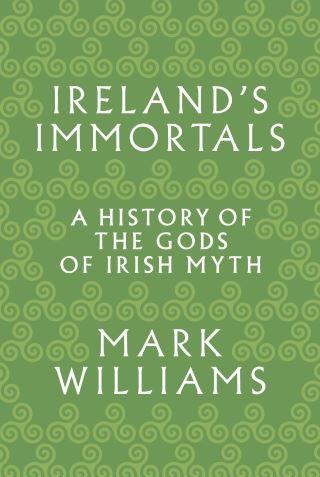 A History of the Gods of Irish Myth

A sweeping history of Ireland's native gods, from Iron Age cult and medieval saga to the Celtic Revival and contemporary fiction

Ireland's Immortals tells the story of one of the world’s great mythologies. The first account of the gods of Irish myth to take in the whole sweep of Irish literature in both the nation’s languages, the book describes how Ireland’s pagan divinities were transformed into literary characters in the medieval Christian era—and how they were recast again during the Celtic Revival of the late nineteenth and early twentieth centuries. A lively narrative of supernatural beings and their fascinating and sometimes bizarre stories, Mark Williams’s comprehensive history traces how these gods—known as the Túatha Dé Danann—have shifted shape across the centuries, from Iron Age cult to medieval saga to today’s young-adult fiction.

We meet the heroic Lug; the Morrígan, crow goddess of battle; the fire goddess Brigit, who moonlights as a Christian saint; the mist-cloaked sea god Manannán mac Lir; and the ageless fairies who inspired J.R.R. Tolkien’s immortal elves. Medieval clerics speculated that the Irish divinities might be devils, angels, or enchanters. W. B. Yeats invoked them to reimagine the national condition, while his friend George Russell beheld them in visions and understood them to be local versions of Hindu deities. The book also tells how the Scots repackaged Ireland’s divine beings as the gods of the Gael on both sides of the sea—and how Irish mythology continues to influence popular culture far beyond Ireland.

An unmatched chronicle of the Irish gods, Ireland’s Immortals illuminates why these mythical beings have loomed so large in the world’s imagination for so long.

Mark Williams: Mark Williams is the Simon and June Li Fellow in the Humanities and Tutor in English at Lincoln College, University of Oxford, where he teaches medieval Irish, Welsh, and English literature. He is the author of Fiery Shapes: Celestial Portents and Astrology in Ireland and Wales, 700–1700.