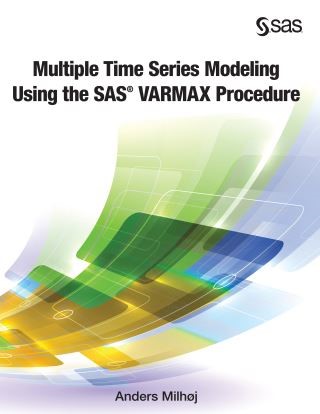 Aimed at econometricians who have completed at least one course in time series modeling, Multiple Time Series Modeling Using the SAS VARMAX Procedure will teach you the time series analytical possibilities that SAS offers today. Estimations of model parameters are now performed in a split second. For this reason, working through the identifications phase to find the correct model is unnecessary. Instead, several competing models can be estimated, and their fit can be compared instantaneously. Consequently, for time series analysis, most of the Box and Jenkins analysis process for univariate series is now obsolete. The former days of looking at cross-correlations and pre-whitening are over, because distributed lag models are easily fitted by an automatic lag identification method. The same goes for bivariate and even multivariate models, for which PROC VARMAX models are automatically fitted. For these models, other interesting variations arise: Subjects like Granger causality testing, feedback, equilibrium, cointegration, and error correction are easily addressed by PROC VARMAX. One problem with multivariate modeling is that it includes many parameters, making parameterizations unstable. This instability can be compensated for by application of Bayesian methods, which are also incorporated in PROC VARMAX. Volatility modeling has now become a standard part of time series modeling, because of the popularity of GARCH models. Both univariate and multivariate GARCH models are supported by PROC VARMAX. This feature is especially interesting for financial analytics in which risk is a focus. This book teaches with examples. Readers who are analyzing a time series for the first time will find PROC VARMAX easy to use; readers who know more advanced theoretical time series models will discover that PROC VARMAX is a useful tool for advanced model building.

Anders Milhoj: Anders Milhoj is associate professor in the Department of Economics at the University of Copenhagen, where he conducts research and lectures on applied statistics topics including survey sampling, regression analysis, time series analysis, and factor analysis. A SAS user since 1984, he employs a variety of SAS procedures in his work, such as SAS/STAT, SAS/IML, SAS/ETS, and SAS/OR. He holds university degrees in statistics and mathematics, as well as a Ph.D. in statistics, all from the University of Copenhagen.