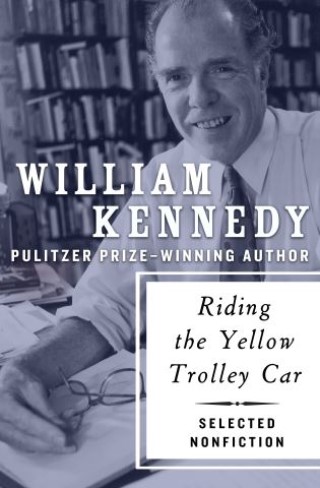 The collected nonfiction of the Pulitzer Prize–winning author of Ironweed: “A great pleasure to read no matter what the subject” (Library Journal).

When William Kennedy arrives in Barcelona, his guidebook recommends taking the trolley around town—but the trolleys haven’t run in the city for years. He’s on his way to interview the novelist Gabriel García Márquez when, out of the corner of his eye, he sees something impossible: a yellow trolley running down the street. Márquez, however, is not surprised; like all great writers of both fiction and nonfiction, he knows that impossible things happen every day.

A remarkable collection from one of America’s greatest authors, Riding the Yellow Trolley Car features work from all stages of Kennedy’s career. Through each piece runs the thread that ties together his greatest works: a love and deep understanding of his hometown, the city of Albany, New York, and the good and evil men who have made it what it is.

Featuring interviews and essays on some of the most prominent authors of the twentieth century, from Saul Bellow and E. L. Doctorow to Norman Mailer and the legendary García Márquez—as well as insightful reflections on topics from baseball to the death of a prominent cat to Kennedy’s wife’s hiccups—Riding the Yellow Trolley Car is an essential book for all those who love to read, or live to write.

William Kennedy:
William Kennedy (b. 1928) is an American author and journalist. Born and raised in Albany, New York, he graduated from Siena College and served in the US Army. After living in Puerto Rico, Kennedy returned to Albany and worked at the Times Union as an investigative journalist. He would go on to author Ironweed, Very Old Bones, and other novels in his celebrated Albany Cycle, and earn honors including a Pulitzer Prize, a National Book Critics Circle Award, and a New York State Governor’s Arts Award.