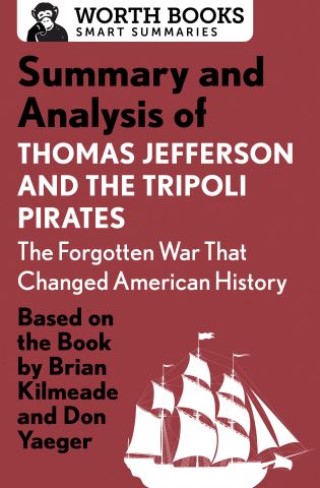 Summary and Analysis of Thomas Jefferson and the Tripoli Pirates: The Forgotten War That Changed American History

Based on the Book by Brian Kilmeade & Don Yaeger

So much to read, so little time? This brief overview of Thomas Jefferson and the Tripoli Pirates tells you what you need to know—before or after you read Brian Kilmeade and Don Yaeger’s book.

Crafted and edited with care, Worth Books set the standard for quality and give you the tools you need to be a well-informed reader.

In 1785, US merchant ships that sailed the Mediterranean Sea began to face an unexpected threat: pirates from the North African coast. American sailors were subjected to pillage and enslavement while their government tried to negotiate tributes and ransom prices with the Islamic rulers of the Barbary nations. As the Barbary conflict intensified, Thomas Jefferson saw that negotiations could only proceed if the United States showed its military strength through a naval presence and the use of force in the Mediterranean. Jefferson committed himself to this cause as he rose to the position of secretary of state and later, president of the United States.

In Thomas Jefferson and the Tripoli Pirates: The Forgotten War that Changed American History, authors Brian Kilmeade and Don Yaeger trace the exciting tale of how these kidnappings led to the First Barbary War, what transpired between the warring nations, and how Thomas Jefferson’s decisions helped shape US policy today.

The summary and analysis in this ebook are intended to complement your reading experience and bring you closer to a great work of nonfiction.

Worth Books:
Worth Books’ smart summaries get straight to the point and provide essential tools to help you be an informed reader in a busy world, whether you’re browsing for new discoveries, managing your to-read list for work or school, or simply deepening your knowledge. Available for fiction and nonfiction titles, these are the book summaries that are worth your time.