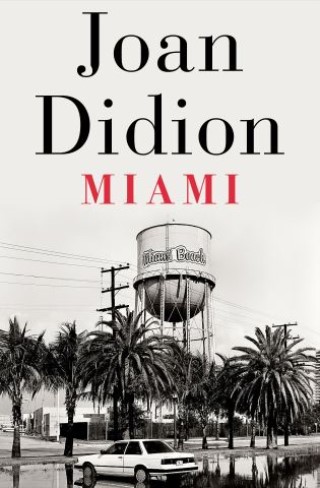 An astonishing account of Cuban exiles, CIA informants, and cocaine traffickers in Florida by the New York Times–bestselling author of South and West.

In Miami, the National Book Award–winning author of The Year of Magical Thinking looks beyond postcard images of fluorescent waters, backlit islands, and pastel architecture to explore the murkier waters of a city on the edge.

From Fidel Castro and the Bay of Pigs invasion to Lee Harvey Oswald and the Kennedy assassination to Oliver North and the Iran–Contra affair, Joan Didion uncovers political intrigues and shadowy underworld connections, and documents the US government’s “seduction and betrayal” of the Cuban exile community in Dade County. She writes of hotels that offer “guerrilla discounts,” gun shops that advertise Father’s Day deals, and a real-estate market where “Unusual Security and Ready Access to the Ocean” are perks for wealthy homeowners looking to make a quick escape. With a booming drug trade, staggering racial and class inequities, and skyrocketing murder rates, Miami in the 1980s felt more like a Third World capital than a modern American city. Didion describes the violence, passion, and paranoia of these troubled times in arresting detail and “beautifully evocative prose” (The New York Times Book Review).

A vital report on an immigrant community traumatized by broken dreams and the cynicism of US foreign policy, Miami is a masterwork of literary journalism whose insights are timelier and more important than ever.