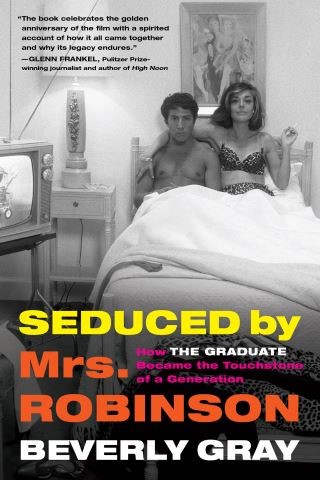 How "The Graduate" Became the Touchstone of a Generation

*An Amazon Best Book of the Month*

“[Gray] writes smartly and insightfully . . . The book as a whole offers a fascinating look at how this movie tells a timeless story.” —The Washington Post

Mrs. Robinson, you’re trying to seduce me. Aren’t you?

When The Graduate premiered in December 1967, its filmmakers had only modest expectations for what seemed to be a small, sexy art-house comedy adapted from an obscure first novel by an eccentric twenty-four-year-old. There was little indication that this offbeat story—a young man just out of college has an affair with one of his parents’ friends and then runs off with her daughter—would turn out to be a monster hit, with an extended run in theaters and seven Academy Award nominations.

The film catapulted an unknown actor, Dustin Hoffman, to stardom with a role that is now permanently engraved in our collective memory. While turning the word plastics into shorthand for soulless work and a corporate, consumer culture, The Graduate sparked a national debate about what was starting to be called “the generation gap.”

Now, in time for this iconic film’s fiftieth birthday, author Beverly Gray offers up a smart close reading of the film itself as well as vivid, never-before-revealed details from behind the scenes of the production—including all the drama and decision-making of the cast and crew. For movie buffs and pop culture fanatics, Seduced by Mrs. Robinson brings to light The Graduate’s huge influence on the future of filmmaking. And it explores how this unconventional movie rocked the late-sixties world, both reflecting and changing the era’s views of sex, work, and marriage.

Beverly Gray:
After earning her PhD in American literature at UCLA, Beverly Gray spent nearly a decade in the film industry, where she was Roger Corman’s story editor at both New World Pictures and Concorde–New Horizons Pictures. She has covered the entertainment industry for the Hollywood Reporter and leads screenwriting workshops for UCLA Extension’s Writers’ Program. Gray is the author of Roger Corman: Blood-Sucking Vampires, Flesh-Eating Cockroaches, and Driller Killers and Ron Howard: From Mayberry to the Moon . . . and Beyond. She lives in Santa Monica, California. Her website is beverlygray.com.