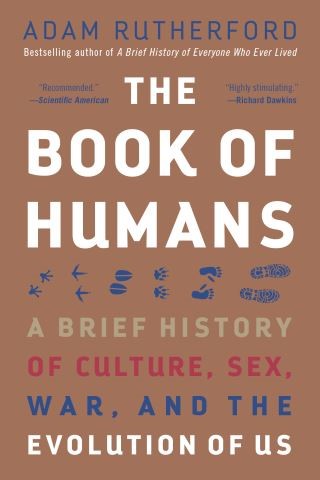 “Rutherford describes Humanimal as being about the paradox of how our evolutionary journey turned ‘an otherwise average ape’ into one capable of creating complex tools, art, music, science, and engineering. It’s an intriguing question, one his book sets against descriptions of the infinitely amusing strategies and antics of a dizzying array of animals.”—The New York Times Book Review

Publisher’s note: Humanimal was published in the UK under the title The Book of Humans.

Evolutionary theory has long established that humans are animals: Modern Homo sapiens are primates who share an ancestor with monkeys and other great apes. Our genome is 98 percent identical to a chimpanzee’s. And yet we think of ourselves as exceptional. Are we?

In this original and entertaining tour of life on Earth, Adam Rutherford explores the profound paradox of the “human animal.” Looking for answers across the animal kingdom, he finds that many things once considered exclusively human are not: In Australia, raptors have been observed starting fires to scatter prey; in Zambia, a chimp named Julie even started a “fashion” of wearing grass in one ear. We aren’t the only species that communicates, makes tools, or has sex for reasons other than procreation. But we have developed a culture far more complex than any other we’ve observed. Why has that happened, and what does it say about us?

Humanimal is a new evolutionary history—a synthesis of the latest research on genetics, sex, migration, and much more. It reveals what unequivocally makes us animals—and also why we are truly extraordinary.

Adam Rutherford: Adam Rutherford, PhD, is a science writer and broadcaster. He studied genetics at University College London, and during his PhD on the developing eye, he was part of a team that identified the first known genetic cause of a form of childhood blindness. His previous books are A Brief History of Everyone Who Ever Lived—finalist for the National Book Critics Circle Award in nonfiction—and Creation, which was shortlisted for the Wellcome Book Prize. He writes and presents BBC’s flagship weekly Radio 4 program Inside Science; The Cell for BBC Four; and Playing God (on the rise of synthetic biology) for the leading science series Horizon; in addition to writing for the Guardian.