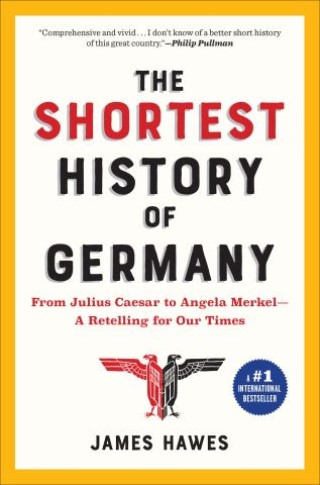 The Shortest History of Germany

From Julius Caesar to Angela Merkel—A Retelling for Our Times

2,000 years of history in one riveting afternoon

A country both admired and feared, Germany has been the epicenter of world events time and again: the Reformation, both World Wars, the fall of the Berlin Wall. It did not emerge as a modern nation until 1871—yet today, Germany is the world’s fourth-largest economy and a standard-bearer of liberal democracy.

“There’s no point studying the past unless it sheds some light on the present,” writes James Hawes in this brilliantly concise history that has already captivated hundreds of thousands of readers. “It is time, now more than ever, for us all to understand the real history of Germany.”

James Hawes: James Hawes studied German at University of Oxford and University College London, then held lectureships in German at the universities of Maynooth, Sheffield, and Swansea. He has published six novels with Jonathan Cape. Speak for England (2005) predicted Brexit; it has been adapted for the screen by Andrew Davies, though not yet filmed. His last book, Englanders and Huns, was shortlisted for the Political Books of the Year Awards in 2015. He leads the MA in creative writing at Oxford Brookes University.