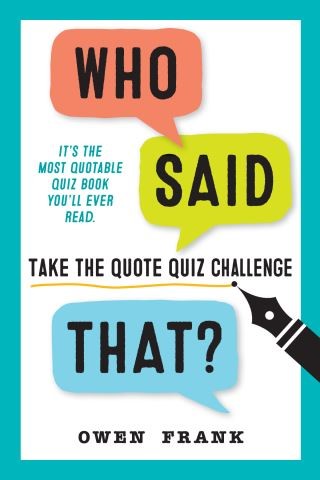 Test your quote IQ! Who said this?

With hundreds of witticisms, musings, disses, words of inspiration, and canny observations, all wrapped up in the form of an addictive game with different ways to play, Who Said That? Is the most fun you can have while actually getting smarter. Or to put it another way, where else would you find Albert Einstein, Mother Teresa, Jay-Z, Bill Clinton, Patti Smith, Charlie Brown, Muhammad Ali, Lena Dunham, Joan Didion, Oprah Winfrey, and Henry David Thoreau all hanging out together?

Owen Frank: Owen Frank is a Brooklyn-based writer and a graduate student in economics at the New School for Social Research. An author of numerous Workman calendars, he has previously written for outlets including The Baffler, Harper’s, and The Nation on topics ranging from public education reform to the startup economy.