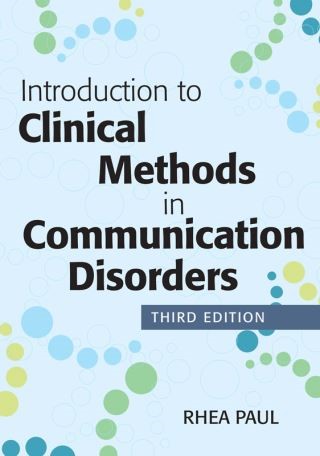 The bestselling core textbook on communication disorders is better than ever with this new third edition, thoroughly revised and based on updated ASHA standards. Covering a broad range of disorders and developmental levels, this text gives future professionals up-to-date guidance on evidence-based practice from more than 20 academics and working clinicians. Preservice SLPs and audiologists will get a comprehensive guide to contemporary clinical practiceâ€”one theyâ€™ll use for the rest of their careers to provide the best possible services for people with communication disorders. An essential text for all students in clinical methods courses and a reliable reference for practicing professionals!

ALL THE LATEST ON

Rhea Paul, Ph.D., received her bachelor's degree from Brandeis University in Waltham, Massachusetts, in 1971, her master's degree from Harvard Graduate School of Education in 1975, and her doctorate in communication disorders from the University of Wisconsin-Madison in 1981. Dr. Paul has published more than 90 journal articles, 40 book chapters, and 8 books. Her research on language development in toddlers with delayed language acquisition was funded by the National Institutes of Health. She has also held grants from the Meyer Memorial Trust, the American Speech-Language-Hearing Association (ASHA) Foundation, the Medical Research Foundation, and the National Association for Autism Research.

Dr. Paul has been a fellow of ASHA since 1991 and received the 1996 Editor's Award from the American Journal of Speech-Language Pathology. In September 1997, she accepted a joint appointment in the Communication Disorders Department at Southern Connecticut State University and the Child Study Center at Yale University. She spent the summer of 1998 as a visiting professor at the University of Sydney in Australia. Dr. Paul received a Yale Mellon Fellowship for 1998-1999 and the Southern Connecticut State University Faculty Scholar Award for 1999. She was recently awarded an Erskine Fellowship to spend a semester as a visiting scholar at Canterbury University in Christchurch, New Zealand. The second edition of her textbook, Language Disorders from Infancy Through Adolescence: Assessment and Intervention, was published in 2001 by Mosby in St. Louis, Missouri. Dr. Paul has been teaching child language development and disorders courses for 20 years.