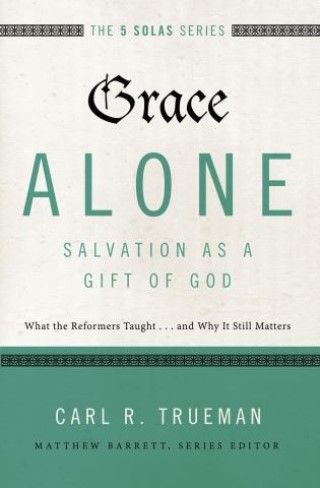 Grace Alone---Salvation as a Gift of God

What the Reformers Taughts...and Why It Still Matters

Historians and theologians alike have long recognized that at the heart of the sixteenth-century Protestant Reformation were the five solas: sola scriptura, solus Christus, sola gratia, sola fide, and soli Deo gloria. These five solas do not merely summarize what the Reformation was all about but have served to distinguish Protestantism ever since. They set Protestants apart in a unique way as those who place ultimate and final authority in the Scriptures, acknowledge the work of Christ alone as sufficient for redemption, recognize that salvation is by grace alone through faith alone, and seek to not only give God all of the glory but to do all things vocationally for his glory.

2017 will mark the 500th anniversary of the Reformation. And yet, even in the twenty-first century we need the Reformation more than ever. As James Montgomery Boice said not long ago, while the Puritans sought to carry on the Reformation, today “we barely have one to carry on, and many have even forgotten what that great spiritual revolution was all about.” Therefore, we “need to go back and start again at the very beginning. We need another Reformation.”[1] In short, it is crucial not only to remember what the solas of the Reformation were all about, but also to apply these solas in a fresh way in light of many contemporary challenges.

Carl Trueman is professor of Historical Theology and Church History at Westminster Theological Seminary. He is the author of numerous books, including The Creedal imperative: Histories and Fallacies; Goods Rush in Where Monkeys Fear to Tread; Republocat: Confessions of a Liberal Conservative; Reformation Yesterday, Today, and Tomorrow; John Owen: Reformed, Catholic, Renaissance Man, Minority Report; and The Wages of Spin. Trueman is also a contributor to Reformation21 where he writes from a Reformed vantage point.

Matthew Barrett (Ph.D., The Southern Baptist Theological Seminary) is Associate Professor of Christian Theology at Midwestern Baptist Theological Seminary, as well as executive editor of Credo Magazine. He is the editor of The Five Solas Series and the author of several books, including God's Word Alone, Reformation Theology, Salvation by Grace, and Owen on the Christian Life.