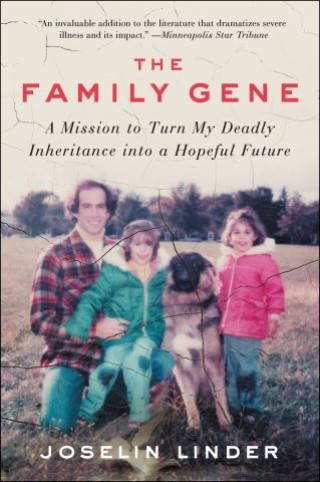 A Mission to Turn My Deadly Inheritance into a Hopeful Future

When Joselin Linder was in her twenties her legs suddenly started to swell. After years of misdiagnoses, doctors discovered a deadly blockage in her liver. Struggling to find  an explanation for her unusual condition, Joselin compared the medical chart of her father—who had died from a mysterious disease, ten years prior—with that of an uncle who had died under similarly strange circumstances. Delving further into the past, she discovered that her great-grandmother had displayed symptoms similar to hers before her death. Clearly, this was more than a fluke.

Setting out to build a more complete picture of the illness that haunted her family, Joselin approached Dr. Christine Seidman, the head of a group of world-class genetic researchers at Harvard Medical School, for help. Dr. Seidman had been working on her family’s case for twenty years and had finally confirmed that fourteen of Joselin’s relatives carried something called a private mutation—meaning that they were the first known people to experience the baffling symptoms of a brand new genetic mutation. Here, Joselin tells the story of their gene: the lives it claimed and the future of genomic medicine with the potential to save those that remain.

Digging into family records and medical history, conducting interviews with relatives and friends, and reflecting on her own experiences with the Harvard doctor, Joselin pieces together the lineage of this deadly gene to write a gripping and unforgettable exploration of family, history, and love. A compelling chronicle of survival and perseverance, The Family Gene is an important story of a young woman reckoning with her father’s death, her own mortality, and her ethical obligations to herself and those closest to her.

Joselin Linder is a regular contributor to the NEW YORK POST, whose work has also been featured on THIS AMERICAN LIFE, MORNING EDITION and LIFE OF THE LAW. She spoke at the TEDX GOWANUS event in Brooklyn in 2014, presenting for the first time on the subject of her family gene and the deadly illness to which it leads. Exclusive to just fourteen people, the story of the gene will be told in Linder’s new book, THE FAMILY GENE, coming out in 2017. She lives in Brooklyn with her husband and two dogs.