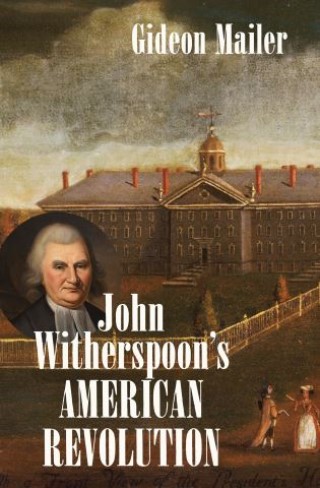 In 1768, John Witherspoon, Presbyterian leader of the evangelical Popular party faction in the Scottish Kirk, became the College of New Jersey's sixth president. At Princeton, he mentored constitutional architect James Madison; as a New Jersey delegate to the Continental Congress, he was the only clergyman to sign the Declaration of Independence. Although Witherspoon is often thought to be the chief conduit of moral sense philosophy in America, Mailer's comprehensive analysis of this founding father's writings demonstrates the resilience of his evangelical beliefs. Witherspoon's Presbyterian evangelicalism competed with, combined with, and even superseded the civic influence of Scottish Enlightenment thought in the British Atlantic world.

John Witherspoon's American Revolution examines the connection between patriot discourse and long-standing debates--already central to the 1707 Act of Union--about the relationship among piety, moral philosophy, and political unionism. In Witherspoon's mind, Americans became different from other British subjects because more of them had been awakened to the sin they shared with all people. Paradoxically, acute consciousness of their moral depravity legitimized their move to independence by making it a concerted moral action urged by the Holy Spirit. Mailer's exploration of Witherspoon's thought and influence suggests that, for the founders in his circle, civic virtue rested on personal religious awakening.

Gideon Mailer: Gideon Mailer is associate professor of history at the University of Minnesota, Duluth.